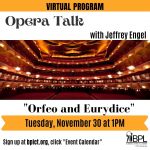 Christoph Willibald Gluck (1714-1787) was one of the most dominant and successful composers of opera during the second half of the 18th century. He was also a major reformer of this genre and is sometimes called ‘The Father of Modern Opera.’ He travelled all across Europe and thrived in cities like London (also appearing in concert with Handel), Paris (meeting Rameau) and Vienna (dining there with the Mozarts). After his death he was still revered by the 19th century greats Beethoven, Berlioz, and Wagner. Jeffrey Engel will present “Orfeo,” Gluck’s greatest work, and detail the composer’s important contributions to the development of opera.