The week before Thanksgiving is always a little quiet, so I planned a new program about a sometimes tricky subject, expecting that I’d have time to lend a hand if needed during our project.  The SEC scientists and I tackled simple circuits and did a fun project to put our new knowledge to work.

First, I wanted all of our scientists to be familiar with some of the materials we’d be working with.  Each scientist had at their stations, among other things:

GETTING TO KNOW YOUR LED LIGHT 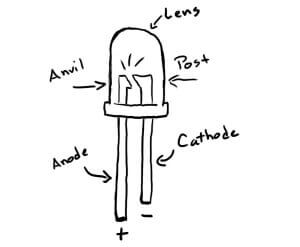 Alycia at iD Tech had a great blog post about creating light-up circuit cards that also had great information for people new to creating circuits. In particular, I liked her information about LED lights.

LED stands for “Light Emitting Diode.” This means that the purpose of this LED is to generate light. Power goes through the anode (“+” side of the LED) and cycles back to the battery through the cathode (“-” side of the LED) to start the process over again. When the power passes through the anvil to go to the post, light is formed by the released energy. The lens magnifies the light that is generated, which is why a single LED is so bright.

The positive, longer leg of the LED light always touches/connects to the positive side of the coin battery; the shorter, negative leg of the light connects to the negative side of the coin battery. Before we even looked at the circuit template on paper, I had all scientists test their LED lights on their batteries. There’s always the chance that one or the other is burnt out and needs to be swapped with a replacement. 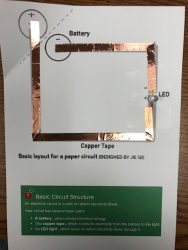 With the testing done, and once we were all familiar with this basic information, I distributed a card with a template for creating a simple circuit.  [The template shown to the right was adapted from a Maker Camp post about paper circuits.] One of the trickiest parts of creating the circuit is working with the copper tape. You don’t want to peel the full backing off at one time because the tape will curl up on itself – and because it is delicate, it will tear easily.  Also, ideally, when the tape needs to go around a corner, you want to try and fold the tape to keep it in a continuous single piece (rather than ripping and overlapping pieces). But folding the tape can be tricky in it’s own way. The scientists that chose to tear and overlap copper tape did not create a successful circuit, but the ones who were able to fold the tape and keep it in one piece did have a circuit that successfully lit up their LED lights. Gella in her blog post on Sparkfun provided a couple of good images with a technique for folding the copper tape at corners: 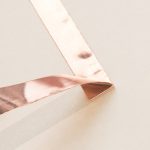 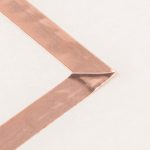 Rather than spend time trying to refold copper tape on the templates for the scientists that had some issues, we decided to forge ahead with our main project of the day (given our time constraints).

There are actually a lot of versions of circuit bug project online (for the avid science explorer to search out). I knew that I needed to find inspiration from a project that didn’t require specialty LEDs or other special materials.I found the perfect inspiration from www.girlstart.org (and I encourage you to also read their article about this project).

The basic components of the circuits for our “bugs” were the battery, wires, and LED light bulbs. Using wires with the LED light(s) gives each scientist more flexibility in how they design their circuit bug. I was fortunate to buy a spool of red and white wires twisted together for a previous project; on this day, I gave each scientist two of each color (each about 5 inches long) so that they could better keep track of which connections in their circuit were (+) positive and which connections were (-) negative.  I pre-stripped the ends of all wires because that can be a fussy, time-consuming process. Each scientist was instructed to wrap the stripped, copper end of the wire around one leg of each LED light. For example, you might choose to wrap red wires around each positive, longer leg of the LEDs, and then white wires around each negative leg of the LED. At this point, it’s important to once again test the LED lights with the battery to make sure all of your connections are solid. To do this (using my above example), you would touch both open ends of the red wires to the positive side of the battery, and both open ends of the white wires to the negative side of the battery. If the LEDs light up, then you’re ready to begin designing your circuit bug!

First and foremost, any design is a good design 🙂  When I designed my own bug, I chose to use the two LED lights as eyes, so I attached them to the open end of my clothespin. I wrapped the extra wire lengths along the clothespin – being careful not to cross the positive and negative wires/connections! – and then taped them in the proper position to my coin battery at the other end of the clothespin. [NOTE:  If you cross your positive and negative wires, you could create a “short circuit” that would prevent your circuit from working.]  I then used pipe cleaners (or chenille stems) to fabricate the body and wings of my bug.  During our program, I put out a vast array of supplies to let the scientists have full creative freedom when they designed their bugs. There were pipe cleaners, feathers, buttons, google eyes, beads, and more.  Some chose to do a bug similar in style to mine; others wanted to only use one light and create something like a firefly.  Sometimes it was challenging for the scientists to create solid circuits, so we had to fuss a little with the connections, but they all did a fantastic job.

As an extra project, I sent many of them home with a template to create their own light-up greeting card (similar to the circuit we created on paper at the start of the program with copper tape). All-in-all, it was a challenging topic, but our scientists were up for the challenge!