In October’s SEC, Prosser’s young scientists discovered (and showed) that baking is also another form of science!

Before we started in on our recipe and baking tasks, we had a brief discussion about some of the ingredients we would be working with. In particular, we talked about the difference between baking powder and baking soda, and what both items can do for a baked item. Using inspiration from the Steam Powered Family blog, I set up two pairs of test tubes in front of our room. There were two test tubes with baking soda (BS), and two test tubes with baking powder (BP). First, we tested to see if there would be any reaction if I simply added standard tap water to the BS and BP. We all noticed that there was no reaction at all with the BS, but there was a reaction – some minor fizzing – when we added water to the BP.  Then we added some lemon juice to both BS and BP. With the lemon juice, an acid, we saw dramatic reactions in both test tubes. Why did some liquids affect our ingredients and the other did not?

With that small introduction to some of our ingredients under our belts, I introduced the scientists to our recipe for the day, obtained from Scientific American online (“The Scientific Secret of Fluffy Pancakes”). The recipe and instructions (originally obtained from CooksIllustrated.com) are as follows: 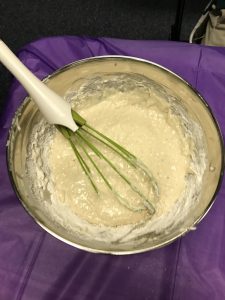 I divided our scientists into three groups, sitting at three different tables. Each table made the same base pancake recipe, with a few exceptions:

When the three batters were ready, my teen volunteer and I fired up two table-top griddles. We started by cooking pancakes from the batter made by groups 1 and 2.  We placed sample pancakes on paper plates so we could compare. Right away, we all noticed a difference in how the batter poured into the griddles. The over-mixed batter was looser and spread more in the pan, ultimately making wider and thinner/flatter pancakes. When we cooked the batter from group 3, we noticed that the extra baking powder and baking soda made for fluffier pancakes as soon as the batter was poured onto the griddle. All batters created yummy edible pancakes 🙂

Parents were happy to help and even brought donations of pure maple syrup to add to the pancakes (and I added some mini-chocolate chips to the mix). All scientists had 2-3 pancakes as a treat before the conclusion of the program.