For the final SEC program before our summer events, I thought it would be fun to focus on spies, all of the cool gadgets they use, and especially some nifty code making/breaking techniques. As always, we began with a presentation that introduced a lot of really interesting history about spies and the tools they have used through time.

Spies and espionage were being talked about as early as 400-500 BC, when a Chinese diplomat and military strategist named Sun Tzu wrote a still very famous book called The Art of War. In his book, he said that “…an army without secret agents is exactly like a man without eyes or ears,” and he described different types of spies and various techniques they could use to gather information about enemies. Many famous leaders throughout history have made great use of espionage and spy tools. Take for example Julius Caesar. He invented an alphabet cipher that has actually come to be known as the “Caesar Cipher” and was used for all of his communications with his army generals and key contacts. It is one of the simplest and most used shift ciphers. Basically, the cipher alphabet is the plain alphabet rotated left or right by some number of positions. For example, by shifting all letters 3 places to the left, the letter A would be replaced by the letter D, the letter B would be replaced by the letter E, etc.  Alexander the Great also used spies, and Ghengis Kahn made a point of recruiting local people from the villages he conquered to act as his spies.

Spies aren’t just men, though. There have been many famous women spies throughout history. During the Civil War, both Belle Boyd and Mary Elizbeth Bowser were active and successful spies. Boyd spied for the Confederates by mingling with Union soliders that gathered at her father’s hotel. And Bowser pretended to be an illiterate servant so she could listen in on the Confederate President’s conversations and bring information back to the Union troops. One of the most famous female spies was Mata Hari. She was a double agent that spied for both the French AND the Germans during World War I…until she was betrayed and then executed (by hanging) for her crimes.

In the United States, we have 2 agencies with spies:  The Federal Bureau of Investigation (FBI) and the Central Intelligence Agency (CIA). What is the difference between the two agencies? The FBI is primarily a law enforcement agency, collecting intelligence related to domestic security and performing crime investigation. The CIA is an international intelligence agency which is not responsible for domestic security. In simplest terms, the FBI investigates crimes and the CIA gathers intelligence. Here are some fun facts about the CIA in particular:

One of the coolest things we explored during the program were the various tools that spies have used (and still use) for their work. Some of these tools included:

The Microdot Camera was particularly cool, and is still used today. It can convert a full page of text into a tiny dot that then requires the recipient to read it through a microscope! The flashlight gun is no doubt a particularly effective weapon – I imagine that a spy/agent could blind an enemy with the light and then shoot.

Even better than tools was our discussion about all of the ANIMAL spies that have been used throughout history (and even some crazy stories about animals suspected of being spies!):

OUR PROJECTS FOR THE DAY

I had several projects set aside for our SEC scientists in a large folder at each work station.  Our scientists did a lot of self-directed learning since many of them wanted to progress through the folder of challenges at different rates. I was a bit ambitious and provided more activities than we could hope to go through…but all scientists were able to take their folders and projects home to complete as well.  Most of what we did during the program involved codes, but I’ll describe the other projects in detail as well. 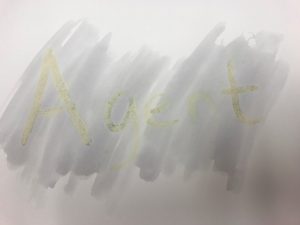 First order of business:  invisible ink. There are a lot of different recipes for invisible ink. Some of the most popular versions involve using a lemon juice solution to write your message, and then using a heat source to reveal the message after the paper is dry. It was difficult for me to find a good heat source for us to use during our program, so I used another popular recipe for invisible ink that requires just a couple of common household ingredients:

You mix the baking soda and water together in a cup. Once mixed, you can use either a paintbrush or a cotton swab to dip into the baking soda/water mixture and write your message on a blank piece of paper. Once the paper is dry, lay it flat on a surface (preferably with a tablecloth or something underneath to protect your surface). Dip a clean cotton swab into some regular grape juice, and rub it back and forth across the paper. The grape juice reacts with the baking soda to reveal your secret message!  In the interest of time, I created a series of messages in invisible ink prior to the program so the scientists would have something to just reveal. I chose to put my message on cardstock so that the paper would dry smoother and make the grape juice reveal that much better. Sadly, this was one of the projects the scientists took home with them.

Next, I showed our scientists a neat “spy” trick I learned in The Master Spy Handbook by Rain Newcomb:  The coded rubber band!

I knew we also needed to test our scientists’ powers of observation. I distributed several puzzles and codes for them to decipher/work on, including a “Find the Hidden Picture” puzzle from a recent Highlights Magazine and a genuine picture cypher from World War II for them to find a hidden meaning in. Both groups did a great job finding the solutions…without using my answer keys!

I also found a handful of terrifically fun codes to break on a site called Secret Messages for Kids (http://indigoimage.com/secretmsg). Some of the favorites from that site were the color codes – you need to lay a piece of red cellophane on top to reveal the code [I purchased a roll of red cello wrap at Party City and just cut out some large squares for our scientists.] 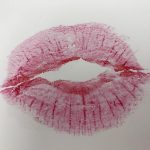 Another activity we didn’t quite have time for was analyzing fingerprints and lip prints…though I suspect I will revisit this during a CSI program in the future. For the finger print activity, you simply need to scribble a large page of lead from a pencil on a piece of paper. You then rub one of our finger pads through the lead, place a piece of scotch tape across your finger, remove the tape, and place the tape sticky-side down on a piece of white paper. Voila! Your fingerprint is revealed!  The tough part of then analyzing the different whorls and swirls in your fingerprint versus other prints. You can also analyze some common patterns in lip prints!  I did include some sample lip prints in everyone’s folder, along with a sheet explaining some common characteristics to look for… Finally, we attempted to use a cipher wheel (our template came from Kids Make Stuff though there are many examples/templates of this wheel online – I think the template I used no longer exists online). Again, we didn’t get a chance to do more than touch on this codebreaking tool, though I walked several of eager scientists through the use. Basically, to encrypt text (or make it secret) you first turn the inner/smaller disk to set a code letter (that letter will appear through the small cut out window in the smaller disk). Then, for each letter of your message, you find your letter in the outer ring and replace it with the letter shown on the inner ring. To decode text, you turn the inner disk to set the correct code letter (as given to you by your partner), and then you find each letter of their message on the smaller disk and replace it with the true letter shown on the outer disk.

Most of our time for the program was spent on practicing codes. I gave each scientists a stapled pack that included practice codes for “the tick-tack-toe code,” the Caesar Alphabet, Morse Code, and a “substitution cipher” using The Periodic Table. This was practice was important, because I gave all scientists a group code-breaking challenge at the end of the program. They needed to solve a series of codes to break into our Breakout Escape Game black box that had multiple locks on it. If they could break the codes and unlock the locks, they could get to the prize inside:  Some NERDS candy and “Rainbow Peephole.” It was no surprise to me that the scientists cracked the codes lickety-split 🙂  I even did a final door prize drawing to pass out some fake mustaches with secret identities!  Fun was had by all, and I’m really looking forward to our summer programs:  Marble Runs and Art Bots! 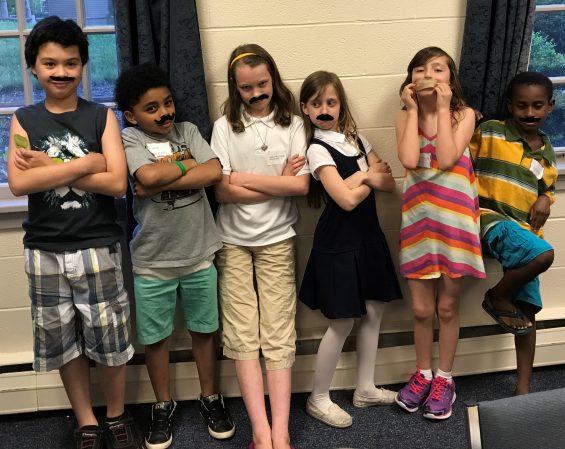