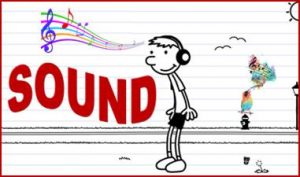 In anticipation of April’s visit from Mystic Aquarium to talk about how Beluga Whales communicate, I thought a program where our scientists learned a little about “sound” was in order. And besides, what is more fun than creating a lot of really obnoxiously loud noises? 🙂

We started our program by talking about the nature of sound and how sounds are actually created.  When objects vibrate, the vibrations are projected into the air and create sound waves. Even though you cannot see sound waves with the naked eye, you can often feel sound vibrations. [If you’re looking to explore this further, how about testing out your very own “sound gun” at home? Trust me, it’s a blast!]

And most of the scientists successfully answered all of my tricky true and false questions. From the series of questions, we learned a lot of cool facts about sound:

And I even found some cool examples of record-breaking sounds to share with our group:

But we never do just discussions in our Science Explorers Club…we’re scientists after all! So I had a full series of demonstrations and small experiments for us to do, to help us explore sound in a variety of ways.

When George Lucas directed the earliest Star Wars movies (first released in 1977), money was tight. Nobody had ever made a science fiction feature film like this before. So when they needed to create the laser sounds made by the guns on the space ships, his effect team came up with an ingenious idea:  attach a funnel to a metal spring and just let the magic happen.

As a group, we were able to recreate something similar using just a classic metal slinky and a Styrofoam cup. My scientists all received a tiny slinky and a tube of Styrofoam created from a cup. The video below shows how you can create the sound effect using a standard-sized slinky and full-sized cup. This demonstration is always a favorite with my scientists!

I have been itching to make this wave machine for YEARS, and I finally had time to do it for this program. There are a lot of how-to videos online from teachers and science enthusiasts. The video I was initially inspired by is at https://www.youtube.com/watch?v=VE520z_ugcU. The materials are very easy to come by.

The wave machine is very easy to create, but it does take some patience and some time. I used a ruler as a guide to make sure that my bamboo sticks were approximately the same distant apart. You do need to attach the two ends of your wave machine to something solid – I used to heavy tables. You will find that if you’re making a long wave machine like I did, the wave machine will start to tilt as you progress with the construction. You simply need to adjust the position of the gummy bears on various sticks to rebalance the full wave machine. The video below shows you my finished product. Our scientists had a great time testing out different wave speeds, etc. And best of all, you can simply detach the wave machine from each place you anchored it to, roll it up, and store it for use again in the future!

This experiment never fails to impress! There are many sites that describe how to perform this experiment. It is a very simple experiment, but one with a very cool pay-off. You simply tie a piece of string or yarn (about 1-2 feet long) to each end of a metal clothes hanger.

RESULT: The first sound should be a light dinging noise; the second sound should be almost like a loud gong. ANSWER: With the second attempt, you are giving sound a more direct, quicker path to your inner ear…for a much louder, and more accurate, representation of the sound created.

These noise makers are always a hit with my scientists. They are easy to make, and very easy to use.

You can click on the experiment title above to see pictures with a step-by-step explanation of exactly how to assemble the sound sandwiches. The videos below show you 1) the large soundmaker, and 2) the small soundmaker that we created as a group. They were fantastically fun! Our scientists noted that the larger sticks created a lower, deeper tone than the smaller sticks.

TAKING IT FURTHER:  Try creating a triple or quadruple stacked sound maker by adding another layer of sticks, straw pieces, etc….how does the quality of the sound change? Does the sound change at all, or does it stay the same?

Science Explorers will be back in May with the Science of Espionage! But until then, don’t forget about our visit from Mystic Aquarium on April 18th!