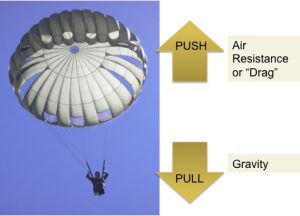 To kick off our Fall 2017 Science Explorer Club, we learned about push and pull forces by testing our own parachute models!

We started our program with a fun parachute demonstrate, getting a feel for the push and pull forces that our parachute models would later be subject to. What are push and pull forces? An example of a push force is one person pushing another person backwards. Or in our parachute situation, the force of air resistance pushing up from beneath the chute itself. An example of a pull force might be gravity itself, and how gravity pulls objects downward toward the earth’s surface. Forces have the ability to change the speed or even the direction of an object. When somebody jumps out of a plane and parachutes to the ground, two key push and pull forces are in action. Gravity rapidly pulls the person toward the ground. Then the parachute helps to provide a crucial push force that slows a person’s descent and keeps them from smacking into the ground. How is this push force created? Air collects under the parachute and provides resistance, or drag, that essentially pushes back against the “pull” of gravity and makes a person fall at a much slower and safer rate to the ground.

I never do this program without sharing a video of Felix Baumgartner’s free-fall parachute jump. Wearing a special pressurized suit, he rapidly climbed skyward in a helium balloon – so high that he broke through the troposphere and could look back on the earth from the darkness of space. And then, he did the unthinkable – he jumped!  At my last check, Baumgartner holds world records for:

Joseph Kittinger (who formally held those records) actually still holds the world record for the longest freefall duration at 5 minutes and 35 seconds (Baumgartner did a free-fall for 4 minutes and 20 seconds). Though it should be no surprise that Baumgartner was unable to break this record since he also fell at a quicker rate than Kittinger. Below is a highlight video of Baumgartner’s jump.

To test both push and pull forces, the task of the day for our SEC scientists was to create and release their very own parachutes! An example of a simple parachute design can be found on the website for PBS’s program FETCH (though there are many similar experiment instructions to be found online). Our materials for the parachutes were simple enough:

The real challenge was figuring out which material made for the best parachute (in other words, the slowest drop to the ground). The scientists were given the freedom to design their own parachutes by combining materials, using additional paperclip weights, and testing and retesting their own designs. Our scientists launched their parachutes by climbing a tall ladder (always under the watchful eye of one of our staff members). I timed many of the launches with my handy stop watch and recorded videos of others.

Early in our testing, it became obvious that the cloth squares were too heavy and fell pretty quickly to the ground. However, both the garbage bag squares and the tissue paper squares provided some excellent “hang time” in the air. And even the coffee filters used in certain ways made for nice, gentle descents from the ladder. Our best parachutes designs had good air time solidly around 4 seconds! Below is a video montage of many of our parachute runs. I hope everyone had as much fun testing their parachutes as I had watching the test runs!