Magnets are such fun, and thanks to a donation from Metacomet School here in Bloomfield, I finally had enough magnets to put together a proper program for Science Explorers Club 🙂  First, we started with a few safety rules for our program…(What? Safety rules for magnets?…) 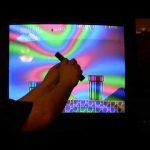 Yes indeed, there need to be some precautions when handling magnets. They can damage many devices in the modern world. Even the smallest magnets can do permanent damage if they come in contact with:

“THE IRON DETECTOR” & HOW IT WORKS

Interestingly enough, magnets are only attracted to iron…which also makes them the perfect “iron detectors.” If you hold a magnet up against other metals – steel, copper, etc. – you’ll see that there is no attraction.

Here’s a fun experiment for home, if you can obtain a smaller neodymium magnet. One of the main components of meteors from outer space is iron. And even though it is rare to see a large meteor hit the surface of the earth, we are constantly being showered with tiny pebble-sized (and smaller) pieces of meteors as they break up in the earth’s atmosphere. On his web site (with an accompanying video), Steve Spangler shows how you can detect and collect actual pieces of meteors from your own back yard!

TRY THIS AT HOME!  You can even use a simple magnet to help with directions. Tie a string to a ring magnet (round magnet with an open center). If you let the magnet hang in the air from the end of the string, the magnet’s own North Pole will eventually face North  because it is being attracted to the earth’s North Pole!

What’s the biggest magnet in the world? The earth itself! In the video below, we learn a little more about how magnets work – and about the earth as a giant magnet:

As a group we also talked a bit about neodymium magnets and how strong the pull of some magnets can be. In the video below, we get a peek at the world’s largest magnet, currently housed in the world renowned “MagLab” in Tallahassee, Florida:

OUR PROJECT OF THE DAY:  ELECTROMAGNETS

Electromagnets were a key focus for us given that our experiment of the day was also creating our own electromagnet using some simple-to-find items. Electromagnets are magnets that become active with the presence of electricity. Once the electricity stops or is interrupted, the object ceases to function like a magnet.

We used information and instructions from Science Bob as the foundation of our electromagnet experiment.

The steps of the experiment are simple enough. Leaving about a 6-inch lead, you wrap the wire around the nail (being careful not to overlap the wire loops on the nail). Our scientists were each able to fit about 35-40 wire loops on their nails. When the wrapping was finished, there was a 6-inch length leading from both the top and the bottom of the nail. We then used duct tape to solidly tape the exposed copper end of one wire lead to the positive end of the D battery (the end with the bump). We then placed a square piece of tape on the other wire lead. Once the second lead is connected to the negative end of the battery, the electromagnet is fully functional and the exposed tip of your nail becomes the magnet (though it may take a few seconds to get fully charged). You will notice both the battery and the nail getting warm to the touch. It’s best if you loosely tape the 2nd lead to the negative side of the battery so that it is easy for you to pull it away from the battery and turn off the electromagnet (to preserve the charge in the battery as long as possible between tests).

One Step Further: How can you make the electromagnet stronger?

TIP – the key to the electromagnet’s strength is NOT the battery – it’s the wire! Try wrapping a second wire on top of the first wire around the nail, and connect both exposed ends to each end of your battery…

With the electromagnet active, our scientists tested the strength of their magnets by seeing how many large paperclips and other objects they could lift with the nail tip. Everyone had a lot of fun exploring just how magnets worked with a variety of objects. I also brought in some magnetically charged slime that worked pretty fantastically, especially with the neodymium magnets. Thanks to a helpful suggestion from scientist Lucas, I created the following time-lapse video 🙂