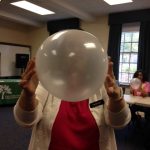 You’re never too old to have fun with balloons…and our Prosser Science Explorers discovered recently just how many interesting things we could also learn with a little help from our piles of balloons!  With a few simple demonstrations, our group was able to discuss:

As always, we started the program with a brief presentation where I kicked off the evening with a discussion about the properties of polymers. In particular, how the rubber in balloons is made of long strands of molecules called polymers. And it is the elastic quality of the polymers that allows the balloon rubber to stretch. 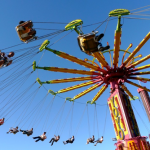 Our conversation then turned to centripetal force and friction. The word “centripetal” is actually Latin for “center seeking.” And that truly describes this force. Without centripetal force, objects would not be able to travel in a circular path (they would only be able to travel in a straight path). One example is how a satellite orbits the earth. In this case, the centripetal force is supplied by earth’s gravity (think of it like an invisible thread that links the earth to the satellite and keeps the satellite moving around the earth in a circular orbit). Another example is the swings ride at an amusement park, where the centripetal force is supplied by the chains that link the chairs to the central pole. To help with this subject matter, I shared one of my favorite youtube videos on the topic with our group. In the following video, Jeff Williams on the International Space Station (ISS), shows that, due to centripetal force, the bubbles in his iced tea package move to the center of the package and form a large, singular air bubble when the package is put into a circular path.

DEMONSTRATION #1 (Polymers): The Balloon Skewer, or what I call, “Balloon on a Stick” 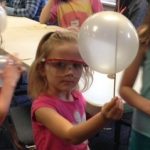 This is definitely a demonstration designed to impress a crowded room 🙂 Thanks to my favorite scientist Steve Spangler, I impressed our scientists with a demonstration from his web site called The Balloon Skewer. By coating a standard bamboo skewer with vegetable oil (for lubricant), you can push the skewer in one side of the balloon and out the other side…without popping it! [The trick is making sure the entry/exit points are where the balloon’s rubber is LEAST stressed, or more opaque looking then the rest of the balloon – near the base where you tied off the balloon, and at the opposite end and top point of the balloon.] Each scientist was given a clear balloon and a skewer to try their hands at this demonstration. An important early step is to inflate the balloon as large as you dare, and then release 1/3-1/2 of the air before you tie off the balloon. This actually helps stretch out the polymers and gives you a better chance at success when you aim to slip the wooden skewer between the polymer chains and through the balloon itself. The vast majority of our scientists were a success…though the sounds of popping balloons could be heard here and there throughout the room. Practice makes perfect!

With our next demonstration, we had a chance to see centripetal motion at its best. The Spinning Penny is a demonstration described on Steve Spangler’s web site. The demonstration itself is very simple. A single penny is placed inside a clear balloon. The balloon is inflated and tied off with the penny still inside. After shaking the penny a bit, the balloon is then swirled to help start the penny on a circular path inside the balloon itself. Due to the limited amount of friction, the penny can stay on its circular path for close to 30 seconds before gravity begins to slow it’s path! Our scientists all managed to create this very cool demonstration of centripetal force and (lack of) friction. [Special Note: It is important that the balloon is pointing toward the floor as well as your eyes when you inflate it – there is a danger of a choking hazard if you choose to tip the balloon above your head to inflate with the penny inside!]

This demonstration is actually a fun variation to The Spinning Penny. For The Screaming Balloon, we replaced the penny with a zinc hex nut…and guess what? The nut also moves on a circular path within the balloon due to the centripetal force we supply, but there is more friction between the hex nut and the balloon thanks to the the shape of the nut, and thus we get a high-pitched whining sound! Very fun for us…maybe not so fun for friends and family 🙂

For every action, there is an equal and opposite reaction 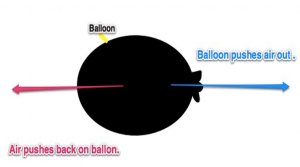 To test this principle, we followed the guidelines of Science Bob to create our very own balloon rockets. We set up two rocket “tracks” in our program room – a pair of chairs with some kite string strung between them (like a zip line). A straw was threaded onto each string. Each scientist received a colored balloon (clear is not necessary for this experiment), and was instructed to inflate the balloon as large as they wanted without tying it off. While pinching the open end of the balloon closed, the balloon is held under the straw and taped to it (with the mouth of the balloon pointing in the opposite direction that you want the balloon to travel in). When you’re ready to the see the balloon in action, you just unpinch the mouth of the balloon and let go! The result mimics the take-off of a rocket, with the air pushing back in one direction and propelling the balloon in the opposite direction. We tested blowing up the balloons to various sizes, and I think we found in most cases that the balloons that were less inflated actually flew in a truer straight path than the over-inflated balloons (which twirled a bit around the track and got caught up a bit).

Below is a nifty video showing our scientists’ efforts during all of the balloon demonstrations and experiments. Be sure to check back with us for our special SEC events this summer (Candy Science, and Geysers & Rockets)!