Density is a really fun topic for discussion, particularly if you’re brave enough to create a 9-item density tower for a demonstration! Creating a density tower does require some patience and a very tall, clear cylinder…but it is definitely worth the effort. But before we talk about the density tower itself, we should probably take a shot at defining just what “density” is…

As described by Andrew Zimmerman Jones on about.com’s education portal:

A material’s density is defined as its mass per unit volume. It is, essentially, a measurement of how tightly matter is crammed together. 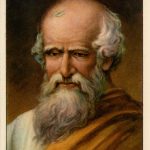 The inspiration for this demonstration came from our dear friend Steve Spangler. The density tower does require some pricier grocery items if you really want to impress the room with as many layers as possible, but all of the items are pretty easy to track down – most of them are probably already in your own kitchen!

First, I had considered actually creating the tower in the presence of the scientists, but after watching this density tower video from Steve Spangler on youtube and seeing just how patient and careful you need to be while creating it, I decided to go another route. I actually created my full density tower the night before my program – it took about 1-1.5 hours because I really took my time with it. I used my large, clear, graduated cylinder and added approximately 100 mL of each substance to the cylinder. I pretty much followed Steve Spangler’s advice in the video I noted above. You can add the first couple of items just by SLOWLY pouring a small stream of the liquid into the cylinder. But then you need to start using the turkey baster to slowly add additional liquids. As Steve notes in his video, keep in mind that several of the liquids are so close in density that it is VERY easy for the liquids to actually mix. If you rush and your items mix, you can let them set for 24 hours or so, but there’s no guarantee that they will cleanly separate (at least not as much as they would have with a more careful hand used in creating the original tower). [NOTE: I colored some of the items so it would be trickier to identify them in the column.]  You add the items in the following order with #1 being the first and most dense item to be poured into the cylinder:

[NOTE: I’ve done this demonstration a few times now, and I had a strange result this time around. It appeared the the milk layer actually curdled overnight! I actually ended up recreating the tower because I didn’t like the look of the curdled milk. This did NOT happen the first few times I did this tower, so it just goes to show you how significant a change in environment/temperature/etc. can be to your results.] 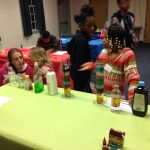 For my program, I disguised the density tower by putting it under a grocery bag on my table at the front of the room, and I lined up all of the items I used to create the tower along the front of my table (in no particular order). After briefly defining density, I drew the scientists’ attention to some simple worksheets on their tables and asked them to work alone or in groups to guess at which of the items landed at which layers in the cylinder. In other words, I asked them to put our nine items in order from most to least dense. I encouraged them to come to the front of the room and shake the bottles/containers so they could get a sense of the different viscosities (thicknesses), etc. The scientists spent a good 20+ min. running back and forth, comparing notes on the various liquids. There was a lot of great deductive reasoning going into the group thought processes. For example, one scientist would say, “The Corn Syrup and the Honey both move really slow and seem much thicker than the other liquids, so they must be more dense than the others.”

I then had a lot of fun revealing the true order of the liquids with the scientists, starting with the honey as the most dense, and ending with the lamp oil as the least dense. But I stressed that a lot of the liquids are actually extremely close in terms of density. For example, compare the density of some of the items used in our density column: 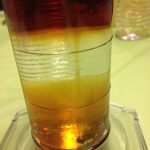 Bolt sinking straight to the bottom…

Once our full list had been revealed, I invited the scientists to the front of the room and my table for the next level of experimentation: adding objects to the tower to test their density compared to our liquids. This was probably the most fun I had all day. The SEC scientists had a blast trying to predict where our different objects would land in the density column, from the bolt to the ping pong ball and everything in-between. Not all of our objects landed at the same levels as noted in Steve Spangler’s own experiment, but I simply explained to the group that our objects may be of different sizes and densities than the ones that he used.

Just to “test” my SEC scientists part-way through our program, I had a mini-experiment set up on their work stations. We had two clear plastic cups – one had water in it, and one had corn syrup in it. Each scientist also had a box of raisins. After telling them which item was in each cup, I asked them which of the two items was less dense. And then I asked them to guess what would happen to a raisin that was dropped into each cup. I am happy to report that all of the SEC crew accurately noted that water is less dense than corn syrup AND that a raisin would sink in the cup of water but NOT in the cup of corn syrup.

There are a lot of different versions of lava lamp creations online, but I was excited to discover this variation via BuggyandBuddy.com.  First, the water is added to the clear plastic cups (about half way up the cup). Then, I had the scientists slowly pour in the vegetable oil. The vegetable oil sits on top of the water due to the difference in their densities. Most of the scientists are familiar with the idea that “water and oil don’t mix.” So this result is not a huge surprise to them. But now the fun starts. I walked around and added a few drops of food coloring to each scientist’s cup. We all watched as the drops, in tact, slip through the vegetable oil and sit neatly on top of the water layer. If you wait long enough, the color drops will be drawn to each other and their combined weight helps them drop into the water and diffuse throughout the water. However, the real magic happens if you add a generous amount of salt to the cups. The salt carries the color drops and a small amount of oil into the water layer. The color immediately begins to diffuse throughout the water. AND because the oil is less dense than water, it rises back up to its own layer, dragging colored water with it. Check out the video I created when I first did this experiment at home (without using salt):