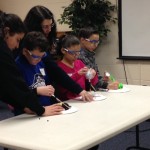 Welcome one and all! This blog is where we will track all of the cool science and experiments we do as part of the Science Explorers Club (SEC) at Prosser Library.

This first program for SEC welcomed a small but enthusiastic crop of budding scientists! And to kick off our ongoing program series, our first topic of exploration was catapults. What is a catapult? In simplest terms, a catapult is a device used to launch a projectile without the aid of an explosive. Invented by the ancient Greeks, catapults can take many different forms. Sling shots and trebuchets are both types of catapults, for example. Even jets use catapults (powered by reservoirs of steam) to help in taking off from aircraft carriers.

The young SEC scientists and I discussed how catapults work with the aid of a series of fun video demonstrations from YouTube. We checked out “the world’s largest slingshot,” we watched as a sneaky grasshopper catapulted lots of bugs off of a leaf, and we also saw some elderly gents from England who designed and built a gigantic trebuchet that could fling a full-sized car through a field! [The videos are embedded below.]

For our project work for the day, I prepared three different models of catapults for our SEC scientists to create, compare and contrast… 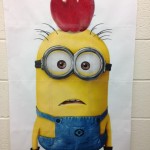 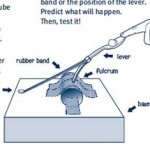 For the initial version of our catapults, we each used instructions downloaded from the web site for PBS’s program called FETCH (“Target Practice“). Once models were ready to test, our G3 scientists tested them out by launching either pom poms or plastic beads at a familiar target: A poster of a minion!  The SEC scientists were quite pleased with how well this catapult worked, with several successful launches at the target. 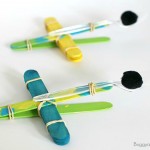 Our second model of catapult was a very simple design, using only three materials: craft sticks (jumbo is best), rubber bands, and a plastic spoon. This model was a simpler design and easier for our scientists to assemble…though there was more of a learning curve in terms of developing the best technique to launch projectiles. We also had several broken spoons as a result of exerting too much force in pulling back the “lever” to launch a projectile. Some of the SEC scientists liked this design better, but others still liked the original best for stability and ease of use. [My personal favorite was this design.] 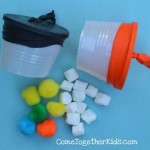 Our final model of catapult is a design very reminiscent of a sling shot. Again, we were able to built it with just a few materials: plastic cups (7 oz), balloons (11″ round), and scissors. You simply cut off the bottom third of the plastic cup (rough edges are okay). With a single balloon, without blowing it up, you need to tie off the open end of the balloon. Once you have the knot in place, you cut off the top, rounded edge of the balloon (maybe about 1/2″). For the final step, you may need an assistant – you need to stretch the balloon wide and place it around the lip edge of the cup. But then using the popper is as simple as pulling back the knotted end of the balloon, loading a projectile into the open end of the cup, and then releasing your hold on the balloon. Even though the design was simple, however, the popper itself was not very sturdy. This was everyone’s least favorite catapult design – the projectiles didn’t go very far, and the cups repeatedly collapsed (even after we reinforced them with duct tape). It would be interesting to see if we could make design improvements by doubling up on the cups, or maybe even using a different size cup. But that will have to be an experiment for another day…