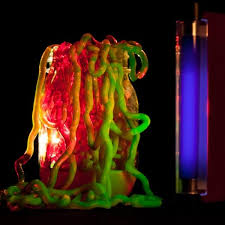 What does ‘Halloween Science’ mean to me? Let’s see…goo, and glow in the dark, and dry ice magic! And that’s exactly what we explored at our October Science Explorers Club program!

This video does a great job of explaining the difference between fluorescence and bioluminescence:

Several times throughout our program we brought out my handheld black light to test the glow of various objects. With a simple black light, there are some easily obtained objects you can test even in your home kitchen. For example, did you know that tonic water will glow bright blue under a black light in the dark?! The quinine in the tonic water reacts to the UV light from the black light. Vaseline (petroleum jelly) also has the same effect under a black light; you can even write secret messages on black paper to test this one out in the dark. 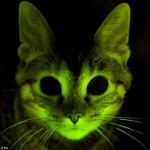 I also shared one of my favorite discoveries with our group – that modern scientists have been doing experiments with real-world glow-in-the-dark animals! They’ve created cats, sheep, dogs, rabbits, and even monkeys that glow in the dark. For example, in 2007, South Korean scientists altered a cat’s DNA to make it glow in the dark and then took that DNA and cloned other cats from it — creating a set of fluffy, fluorescent felines. Why? It might give scientists a better way to track the progress of certain diseases in a living form and to figure out ways to create cures for things like AIDS. The short CNN video below briefly discusses the work of the South Korean scientists in particular with some great shots of the actual glow-in-the-dark cats:

Scientists and other researchers are even working on creating glow-in-the-dark plants and trees as a way to develop an alternative light source. Imagine if some day you could walk down a city street under the light of trees instead of street lamps! However the science for this may have a way to go since the amount of light the plants can generate appears to be significantly less than the fluorescent light from something like a street lamp… The video below showcases an example of the type of work being done in this area:

And if you ever want to watch some really fascinating footage about the deepest ocean and the kinds of creatures that live there, there are a lot of videos online…but you can start by checking out this National Geographic video about the anglerfish. VERY weird and super interesting creature!…

Now for our fun projects of the day!…

Several hours before our program, I placed a single scoop of glow powder (using the scoop that comes with the powder) into each test tube, and sealed each tube with its cap. I then gently tilted the tubes back and forth to distribute the powder within the tube, and put the tubes flat/horizontally on the tables so they could soak up plenty of light before the program 🙂

After my introduction, I asked the scientists to put on their safety glasses and take a look at the powder in their tubes. We then shut the lights off and “voila!” – we saw some major glowing in the dark!  Since we didn’t need any additional special lights to make the glow, we determined that our glow powder actually contains “phosphors” and this created a phosphorescent glow. I then asked the scientists to fill about 1/4 of the test tube with regular tap water, seal the test tube, and gently swirl the water until it captured all of the loose powder in the tube. We hypothesized that the water/powder solution would also glow in the dark…and it did!  I then walked around and filled up most of each scientists remaining tubes with vegetable oil (I did the pouring just to cut down on the mess). We gently swirled and again hypothesized what would happen. Most of the scientists were well aware that oil and water do NOT mix, and the glow powder/water solution remained separate from the vegetable oil (though with too much shaking it was difficult to see this clearly). Thus, we created a sort-of glow in the dark lava lamp that simply needs to be “charged” with regular light to keep on glowing in the dark over time.

One of my favorite science subjects is “polymers.” There are just so many cool things you can do with them. While this project/experiment has incredibly easy steps, it’s a LOT of fun. Prior to the program, I used the little blue measuring scoop and put one scoop of the white Worm Activator Powder in each scientist’s clear plastic cup. Also prior to the program, for each scientist I poured a couple of inches of the green Vampire Vein Goo into one 2 oz. cup, and then a couple of inches of clear goo in a 2 oz. cup.

I asked the scientists to put about 4 oz. of warm water into their clear cups that already had the scoop of worm activator powder in them (the water filled about half of their plastic cup). They stirred until the white powder had dissolved, and then the fun began. They simply needed to use the syringe to pull up some of the vampire goo, and then slowly squeeze the goo directly into the now milky water (making sure that the tip of the syringe did NOT touch the surface of the water). Instantly solid worm (polymer) chains form! How does this work? Basically, the white powder is a calcium solution that helps the polymers in the Vampire Vein Goo form chains as soon as the two solutions come in contact with each other. The best part of this experiment is that when you turn out the lights, you can make the “worms” glow in the dark under the black light! The vampire goo is a real treat. It contains a special dye that actually reacts differently under various kinds of light. It glowed under the black light, but when we used the light of a flashlight, it looked red (“Like blood!” as most of the scientists proclaimed). 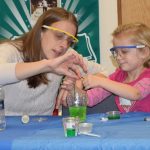 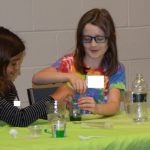 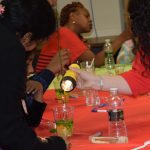 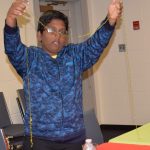 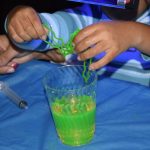 For the clear worm goo, I let each scientist pick which food coloring I should add. They then just stirred it into the goo with a spoon and used the same syringe to create even more worms in the same cup!

This slime couldn’t be simpler to make, and I just couldn’t resist an opportunity to throw a little slime into our day 🙂  The shaker slime cups make even the measuring easy. I pre-filled each scientist’s cup with green slime goo up to the 2 mark on the cup (2 oz.). I then walked around and added 1 tablespoon of the cross-linker solution to each cup during the program. [Most slime recipes use Borax as a cross-linker.]  But before the shaking began, I added our special Halloween secret ingredient to the mix – fake cockroaches!  With the lids sealed tight, it takes under a minute of shaking to bring the mixture together and create some devilishly fun slime. 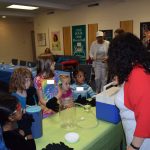 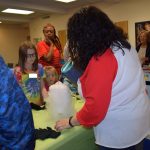 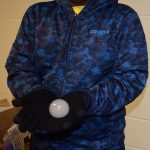 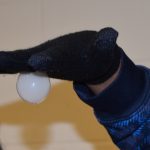 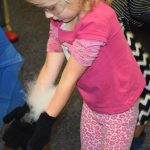 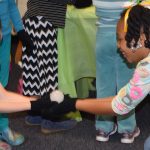 This was by far one of the favorite moments of the day, so definitely a great way to round out our Halloween science. In a previous SEC program, we explored the science of bubbles. As a quick refresher, I reminded our scientists that by simply putting on a cotton glove, they would be able to temporarily hold a bubble in their hands without it popping. [The glove protects the bubble from the natural oils in our hands and thus the bubble has a longer-lasting surface tension.]  Before creating our “boo bubbles,” I talked to the SEC scientists about the precautions we needed to take for using dry ice in our demonstration. I was the only person allowed to directly touch the dry ice, and I had to use a special glove in order to do even that. Once I added some dry ice pellets to the boo bubbles jar, I then poured some warm (not hot!) water into the container. [NOTE:  It is dangerous to add hot or boiling water to dry ice – you could literally melt the container with the resulting reaction!]  Then it just took a little practice to create the actual vapor-filled bubbles.

As soon as the water hits the dry ice, the vapor starts to pour out of the container. You then need to just get the hang of first dipping the end of the rubber tube into the bubble solution BEFORE you plop the lid onto the container (you just need to cover the opening of the container – no need to try and screw the lid on). I discovered that if I dipped the tube into the bubble solution after I had put the lid on, the vapor came pouring out of the tube before I even got any bubble solution on the end of it, and thus I created a bubbling mess in my bubble solution cup.  When the first bubbles came out, I just let the scientists play with the bubbles however they wanted. I later challenged them to try and pass the bubbles back and forth to each other using the gloves. It was so much fun that we didn’t want the boo bubbles to end! Nonetheless, it was the perfect end to a really fun Saturday afternoon…