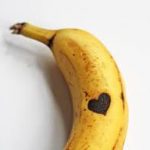 Sometimes, my programs come together in very interesting ways. My idea for this program started with a beautiful banana – [I’m a big banana fan – they are just so darn interesting!] – and then it grew from there. There are so many fun science projects and demonstrations you can do with food that I just couldn’t help myself. So for our first Science Explorers Club program this Fall, I had our scientists take on the following:

The trick with this experiment is that it actually takes some time to complete it and get to the results phase. So I started our program hour with Part One of this project, and we returned to it later in the hour. [I always try to make our transitions from one activity to the next smooth sailing, so I distributed most of our program supplies to each scientist’s station before we started.]

After explaining to the group that we were going to try and verify that Total cereal adds actual iron to its cereal flakes, I asked each scientist to first seal up the baggie of Total cereal at the station and smash the cereal into small pieces/crumbs. As you can imagine, my crew had a LOT of fun pounding their cereal into smithereens. After a few minutes, I asked each scientist to pour their cereal crumbs into a second, fresh baggie and then fill the bag about 1/3-1/2 up with water. [I discovered during my own early testing that the process of crushing the cereal flakes created some small holes/tears in the original baggie…which of course made for quite a mess when I added water to the bag. My simple solution was to have every scientist start with a fresh bag before we added the water.] Once the water was added, it was time to set this project aside for 20 minutes or so. 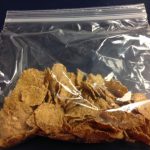 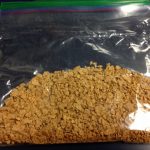 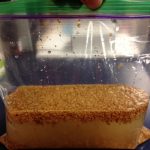 When we came back to this experiment at the end of the hour, the next steps were very simple in deed. I asked each scientist to shake their bag of water-logged cereal flakes…which essentially breaks up the flakes even further so you get something that looks rather like a cereal slurry. [NOTE:  In some cases, our scientists had not added enough water to their bags initially, so they returned to a blog of waterlogged cereal. We simply added more water so we could achieve a more fluid consistency.] Ideally, there should be some air trapped in the bag so that when the bag is lying flat on the table, you have a pocket of air that floats to the top. Each scientist laid their bag of slurry flat on a table placed their neodymium magnets directly onto their bags. When you do that, the magnet pulls actual iron filings up from the slurry to the surface of the bag. You can even drag them around the top of the bag with the magnet’s help! Our scientists (and their parents!) were amazed to find actual iron in a breakfast cereal!

Many breakfast cereals are fortified with food-grade iron as a mineral supplement. Metallic iron is digested in the stomach and eventually absorbed in the small intestine…  [Steve Spangler, “Eating Nails for Breakfast”]

In the 2015 National Geographic Kids book, Edible Science, there’s also a wonderful description of the same experiment (pg. 18) along with an explanation for why the heck manufacturers put iron in our cereal:

Iron is naturally found in meat and some vegetables. In those foods, the iron exists as one part of a large molecule, such as hemoglobin. However, the easiest way for a food manufacturer to increase the iron content of a product is to add pure, metallic iron. Many cereal makers grind iron into metal dust and mix it into the batter for their flakes… (pg. 18)

In the video below, Steve Spangler does a great job of explaining the experiment itself. 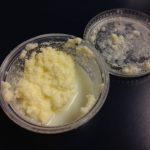 Even having done this before with a different group of scientists, I’m still amazed at how easy this is…and how satisfying. There’s something really nifty about letting my scientists make something that they can instantly use (or consume). I passed out the mini cups, which had about 1/4 to 1/2 inch of heavy cream in the bottom. [This small amount of cream produces plenty of butter for each individual scientist, approximately 1-2 servings.] I instructed my scientists to add a pinch of salt for flavoring if they wanted (most of us eat salted butter at the dinner table). We sealed the cups tight, and then it was just a question of some time and arm muscle. You need to shake the cream in the container for about 5 minutes to instigate the physical change in the cream. Basically, when you agitate the cream for a long enough period of time, you are helping to separate the fat solids from the “butter milk.” [NOTE: Leaving the cream at room temperature for a while gives the physical transformation a little boost.] Every one of the scientists saw the full physical change and achieved both the full butter solids and the butter milk!  And everyone loved snacking on bread with their own homemade butter 🙂

While my scientists munched away on their bread and butter, this seemed like the perfect time to give them a little something sweet to sample at the end of our snacking. While browsing through my Nam Nam Paleo cookbook, I discovered that you can make the most amazing fake ice cream using frozen bananas as your base. 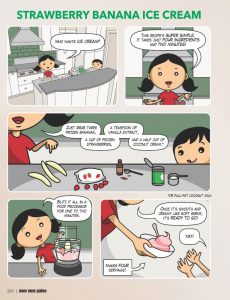 I carted my food processor in from home, and then proceeded to demonstrate to my scientists how to put together this recipe. After just a few minutes in the food processor, the ingredients really do have the texture and temperature of a nice soft-serve ice cream without using any milk or cream! [NOTE: You need to be patient. At the halfway point, it will seem like you’re just creating frozen fruit crumbles, but keep the food processor chugging and eventually you’ll have the smooth and creamy texture you want.] The hero in this recipe is the banana. Bananas have high levels of pectins (a type of water-soluble fiber). It’s difficult to find scientific explanations online for why bananas can create this yummy magic, but I did find an article on food52.com that aimed to explain via a discussion with Nathan Myhrvold, author of Modernist Cuisine and Modernist Cuisine at Home:

I am pretty sure the reason is that bananas are very high in pectin…as the blades [of your food processor] slice through the frozen bananas, pectin chains form and the banana churns up into the spitting image of soft serve ice cream… (Nathan Myhrvold)

I had the scientists line up, and I gave them all a sample in a mini cup (like the ones we used to make butter). All of my scientists loved this recipe so much they came back for seconds…and all of the moms present seemed very interested in jotting down the recipe 🙂

This banana project was literally the starting point for this entire ‘fun with food’ program. So easy, and such a quick reward for your efforts. This one did take a little pre-work on my end, though. I selected some fun images that I thought the scientists would have fun working with: a Minion, a LEGO® minifigure, emojis galore, Star Wars characters, etc. I then measured my typical banana and created a rough outline in a blank PowerPoint document (about 2 inches by 7 inches) and then sized the images to be approximately that size. [I wanted to ensure that the images I passed out to the scientists would roughly fit along one side of their bananas, and wouldn’t be too large or too small.]

I pre-cut the images so the scientists could just pick and go. No need for precision here – you want there to be a wide border around the image itself. I then had them tape the image in place on their banana. And then it’s just a question of a little time and patience. You use the push pin to punch holes around the ouline/lines of the image (like tracing the image with a series of dots). When you think you’ve put holes in all of the major lines, you can remove the paper and then just fill in some of the lines with more dots to make for more solid lines (think of it like connecting-the-dots). The closer your dots are to each other, the more it will look like a solid line.

Almost instantly, the dots create a brown discoloration on the surface of the banana. This happens because of oxidation. Bananas contain polyphenol oxidase and other iron-containing chemicals which react with the oxygen in the air when the cells are cut open (similar to what happens when rust forms on a piece of metal). We had some pretty terrific art come out of this science demonstration/project, and as a bonus, the scientists could take the bananas home and eat them later! The push pins actually don’t push very far beyond the skin of the banana, so 1) the bananas stay fresh for a while, and 2) the artwork on the skin remains just as lovely a day two after you complete it. 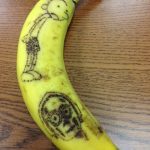 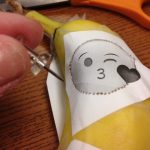 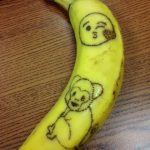 As you can see, we had a lot on our ‘plates’ for this program (ha ha), but it was tons of fun for all! Who doesn’t love playing with their food, right?… 🙂