This month our Science Explorers Club (SEC) had a lot of fun with some really simple paper aircraft and some giant wind bags!… 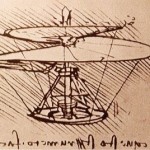 The topic for the day was “flight,” and as we learned in my opening presentation, some of the earliest man-made flying objects were kites found in China as early as 400 BC! Four hundred years before the very first helicopter soared into the sky, famous Renaissance man Leonardo da Vinci was drawing sketches that would later inspire the invention of the helicopter. In the 1780’s, Europeans could be seen floating through the air in hot air balloons. Many of us are very familiar with the work of the Wright brothers in leading advances in mechanical flight (i.e., motorized airplanes). 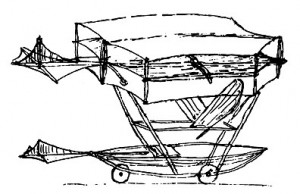 Sketch By George Cayley Of The Monoplane Glider – 1848

However, it is an Englishman named Sir George Cayley who earned the title of “The Father of Aviation.” In the 1800s, Cayley not only detailed the necessary forces at work for objects to fly…but in 1849 he also created the first glider capable of carrying a human being through the air.  And that first air-born human was actually a 10-year old boy!

What does all of this history prove? It means that for much of human history, men and women have been fascinated with flight and continually strive to send objects (and themselves) into the air.

Who is Daniel Bernoulli, and what is the Bernoulli Effect?

Seeing the Bernoulli Effect in action…

Thanks to the Steve Spangler store, Prosser Library purchased some windbags to help us learn about the Bernoulli Effect with a hands-on demonstration. The video below from Steve Spangler’s Sick Science video series shows our basic approach, with the exception that we purchased the ready-made bags versus making our own from Diaper Genies…and I didn’t ask our scientists to tie off their bags because I wanted them to be able to continue with the exercise at home. Our scientists were amazed by the difference a little science can make, and even our youngest scientists were able to expertly fill their bags with only a single breath; if they held the end of the bag open wide before they blew a single stream of air, it allowed additional air to race into the bag to help stabilize the air pressure surrounding the stream of air they created.

What forces are at work during flight?

For the purposes of our program, the SEC scientists just got a brief introduction to the 4 forces and their basic definitions; I didn’t expect them to fully understand the concepts, but I wanted them to be familiar with the terminology. [National Aeronautics and Space Administration (NASA) provides some great information on flight forces.] The forces we discussed are:

Before we dove into the project work for the day, I felt it would be inspirational to see the following video depicting the current world-record paper aircraft throw. The paper airplane had no special enhancements; it was simply made from well-designed and folded paper…though as you’ll see in the video, the trick to the long throw was the throwing arm of a professional football player 🙂  The man who designed the airplane is John Collins, also known as “The Paper Airplane Guy.” Collins has made a full-time career out of doing nothing more than designing paper airplanes! In particular, he is famous for using nothing but paper and origami-like paper folding skills in his designs. Collins shares some simple paper airplane designs on his web site.

I am always fascinated by the “follow foil” – the paper aircraft that can stay in the air continuously. If anyone of our SEC scientists would like to give it a try, one set of instructions for a Follow Foil can be found in the youtube video below. And if you’re successful, I’d love to see your paper aircraft in motion!

In the video below, Collins is interviewed by Will and Norm from Tested so that Collins can share some great information about his paper folding techniques, different design styles, etc.

So, with John Collins and his fabulous designs as one source of inspiration, we then turned toward some great designs from some books. My two favorite sources were:

I displayed and demonstrated a variety of different paper aircraft for the SEC scientists to observe, and then I let them grab instructions for the aircraft that impressed them the most. I walked around the “folding stations,” helping our scientists with one-on-one help as needed.  All scientists present had the opportunity to experiment with: 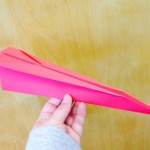 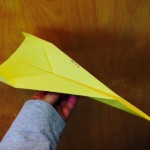 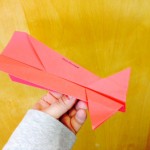 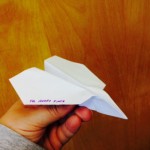 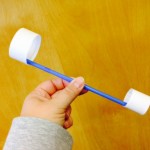 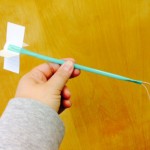 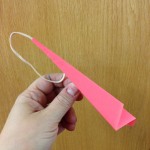 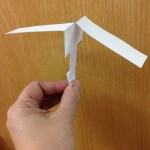 My personal favorite is the Hammerhead – a paper aircraft designed for abuse that glides beautifully (no pointing front end to get mangled after each crash landing!). After my description, that’s the aircraft a lot of the scientists started with. The Rocket and the Streak were also favorites with our scientists because “thrust” was created by rubberbands…and the slingshot-like power of the rubberband launches led to some speedy flights.

We also had several scientists that created their own modified versions of paper aircrafts! [My favorite part of any program is when my scientists feel brave about testing their own designs/theories :)] Some of the original designs from our scientists were named “Glounder” (because it both glides and then pounds into the ground); “Whizzy”; and “Diver.” One of our youngest scientists was endlessly fascinated by the station I set up to test our “copters,” an idea inspired by an activity I saw at the CT Science Center.

Using the Center as my inspiration – and borrowing the copter template I took home from the Center – I set up a similar station in our program room. I had a handy fan that could swivel to point it’s air stream straight up toward the ceiling. When the scientists created their copters, they could launch them into the air stream to test out the design.

At day’s end, all scientists went home with instructions for making the flying craft we used in the program and armfuls of sample paper aircrafts and windbags to continue testing at home 🙂